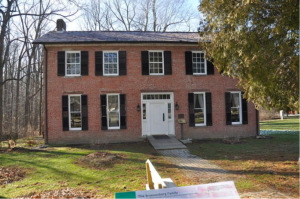 Modern-day Anderson, a quaint city with religious and industrial influences, was originally named in honor of Chief William Anderson, a man of both Swedish and Delaware Indian descent. The settlement was initially titled “Anderson Town,” though nearby missionaries called it “The Heathen Town Four Miles Away.”

William Conner, an early settler of the land, was the first to influence the history of the town when he sold his land to John and Sarah Berry. The Berrys, determined to make something out of Anderson Town, decided they would donate their 32 acres of land to Madison County on the agreement that Madison County make Anderson the county seat. Officials agreed, and in 1827, John Berry surveyed and platted out the original layout for Anderson. The county seat was then moved from Pendleton to Anderson alongside the exchange of land ownership about a year later.

In 1837, plans to introduce the Central Canal through the middle of Anderson promised growth and internal development. Unfortunately, though initial plans lasted for a few years, economic downturn forced plans to halt until they were eventually abandoned altogether. Meanwhile, Anderson first became incorporated as a town in December of 1838 with a population of only 350. With the economic shift and almost immediate suspension of canal plans, however, Anderson lost its status as a town and once again became a sleepy village.

The next economic boom in Anderson occurred March 31, 1887, when natural gas was discovered in the area. The introduction of natural gas into Anderson’s economy led several businesses and factories to the area, bringing with them hundreds of workers and opportunities for growth. Soon, Anderson was packed to capacity, with some factories seemingly relocating to the area overnight. This economic success attracted attention in the news, and soon Anderson earned names like “The Pittsburgh on White River” and “Queen City of the Gas Belt.”

Unfortunately, the city incurred a major economic setback when the natural gas depleted in 1912, bringing about a serious downturn in employment and other opportunities in Anderson. Several factories closed shop and moved on, leaving their empty buildings and jobless employees behind. Thankfully, the forerunner to the Chamber of Commerce, the Commercial Club, convinced Remy Brothers and a few other corporations to stay in Anderson. Soon, Delco Remy and Guide Lamp became the dominant companies in Anderson, while other automobile manufacturers eventually moved into the area.

In the midst of all of this economic change, the Church of God Ministries Headquarters were established in 1904, bringing a religious influence to the city of Anderson. Shortly after, in 1917, the Anderson Bible School was established, later named Anderson College in 1925, and finally Anderson University in 1988. In 1990, Anderson became the ninth largest city in Indiana in 1990, with a population 59,518.